AGL board avoids spill but lashed on climate

AGL Energy’s embattled board has been dealt a humiliating defeat over an activist climate resolution proposed at its annual meeting that further ramps up pressure on emissions reduction ahead of its controversial demerger.

While the board avoided a “second strike” over remuneration, its advice on the advisory resolution to require AGL to set interim targets on emissions for its demerged businesses that align with the Paris accord was ignored by a majority of proxy voters. 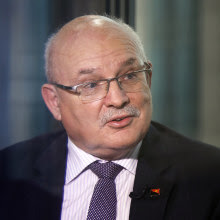 AGL’s board, led by chairman Peter Botten, avoided a “second strike” at the AGM on Wednesday. Bloomberg

A student climate activist who had proposed himself for the board received more than 2 per cent support from proxies, again underscoring the climate pressures facing the country’s biggest emitter of carbon dioxide.

Chairman Peter Botten stuck with the board’s stance that more work is required to define the decarbonisation pathway for Accel and AGL Australia and said it was not in the best interests of AGL to make unilateral commitments on interim targets.

“The task is to create a glide-path rather than a crash landing,” he said.

Read the full article published in the AFR 22nd Spetmebr 2021