The Age, 10th July 2019:  A Chinese renewable energy expert has warned Australia against investing in new coal mines because her country, one of Australia's biggest coal customers, is moving rapidly away from coal-based energy production. 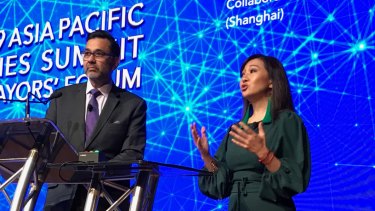 Dr Peggy Liu, Shanghai-based chair of the Joint US China Collaboration on Clean Energy at the 2019 Asia Pacific Cities Summit questions why Australia is opening new coal mines as demand for coal in China declines.

When asked if Australia should be nervous about China’s shift away from coal, Joint US China Collaboration on Clean Energy chair Peggy Liu gave the example of BETA tape, fax machines and compact disc drives.

Dr Liu said her point was that “last decade's” technologies and the jobs they supported no longer existed.

She was asked how Australia could keep jobs in regional centres if mines, producing between 800 and 1500 jobs, were not approved.

Renewable energy use in China hit 38.3 per cent of the countries total installed power capacity, up 7 percentage points from 2015, according to Reuters.

Dr Liu said China had moved away from its “air apocalypse” image to a nation trialling 500 major urban transformation projects at “city scale”.

She said the transformation was backed by a major shift from coal-based energy to renewable energy, driven by wind and solar.

“If you, Australia, are making your long-term decisions based on what you think China is going to do and you knew China is moving away from coal, would you really be in investing in new coal mines?” she asked at the Asia Pacific Cities Summit in Brisbane on Wednesday.

Australia has a range of markets for its coal aside from China, including Japan (34 per cent), South Korea (15 per cent) and India (14 per cent), according to the Center for International Development at Harvard University's Atlas of Economic Complexity.

“If you know you are going to have fewer and fewer buyers of a product, do you really want to invest more and more money in factories to make more of that product?” Dr Liu said.

“Probably not, especially if those factories are going to cost you hundreds and hundreds of millions of dollars to build.”

Dr Liu said the “greening of China” began in 2007 when its government launched a national climate change program. It recently introduced fines for companies and executives that did not meet environmental targets.

“The most polluted country in the world interestingly enough has also become a green leader,” she said.

“China is essentially a new country every five years."

Dr Liu said China had shifted from a largely rural, agricultural country to become an urban-centred nation where 221 cities of a million-plus people would be linked by high speed rail by 2030.