Coal mining companies in the Hunter Valley have failed to set aside enough money to fill in their massive voids or maintain the vegetation required to restore the landscape once their mines come to the end of their lives.

Japanese trading giant Idemitsu has fallen well short in its efforts to replant pasture and woodlands on its Muswellbrook Coal mine in the Upper Hunter, with insufficient topsoil and a poor choice of species being replanted, a report obtained by the Herald shows. 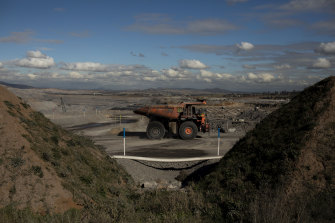 BHP’s Mt Arthur coal mine near Muswellbrook has one of the largest voids in the Hunter Valley.CREDIT:JANIE BARRETT

A report to be released by the Australia Institute on Thursday has found filling in the region’s 23 mine voids would cost between $11.5 billion and $25.3 billion, based on the stated costs per hectare of four mines in the Upper Hunter.

By comparison, the NSW government holds just $3.3 billion in bonds to meet the rehabilitation costs of all mines across the state.

Rod Campbell, a research director at the Australia Institute, said the mine owners won’t be able to afford to “clean up the mess they leave behind”, leaving the public to pick up the tab.

“The voids that the Hunter will be left with represent a multi-billion dollar subsidy to multinational coal companies, one that will be borne by future generations living in the Hunter,” he said