The Morrison government is urged to prepare for a shift in the global economy as major trading partners move to cut emissions. A pledge by Japan to cut its greenhouse gas emissions to net zero by 2050 underscores the risk facing Australia if it fails to prepare for the inevitable shift in the global economy and falling demand for fossil fuels, analysts say. 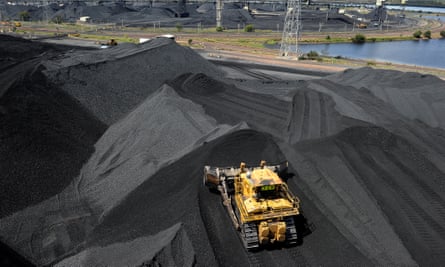 Coal waiting to be loaded on to ships in Gladstone. Japan’s net zero announcement is further evidence that demand for fossil fuels will fall, climate analysts say. Photograph: Dave Hunt/AAP
The new Japanese prime minister, Yoshihide Suga announced the target in his first policy speech to national parliament since taking office last month. He said responding to the climate crisis was no longer a constraint on growth, and proactive measures to change the country’s industrial structure would expand the economy.

Japan is the biggest market for Australia’s thermal coal and gas exports, buying more than 40% of each. Suga’s announcement follows China saying it would reach “carbon neutrality” no later than 2060.

He did not provide details of how net zero would be reached, but said he would promote renewable energy, prioritise safety while seeking a bigger role for nuclear power and “fundamentally change Japan’s long-term reliance on coal-fired energy”.

Its national energy plan is due to be revised next year. Scientists with Climate Action Tracker have previously found the country’s climate plans, including its short-term commitments over the next decade, were “highly insufficient”.

Australian climate analysts said it was further evidence a shift was under way and the Morrison government – which has resisted calls to set a mid-century target and prepare fossil fuel communities for life after coal – should take notice.

“It’s another signal to Australia that we need to get our act together and have a real strategy, not another of these roadmaps that don’t offer direction,” he said. “What matters here is the economic pressure. The world is changing and we need to be part of that change.”

Erwin Jackson, the director of policy with the Investor Group on Climate Change, said Japan’s announcement confirmed what “we’ve known for some time” – that the transition to net zero emissions would happen. He said the 2050 goal had been backed by business groups, investors and the community.

“The core reason Australia isn’t prepared for that is the toxic politics around climate change over the past decade,” he said.