A new material capable of revolutionising energy storage systems is on the verge of being commercialised at the University of Newcastle. Read the article in Newcastle Herald here

HEATING UP: Dr Dylan Cuskelly is part of the team developing a material that can store thermal energy at the University of Newcastle. Picture: Simon McCarthy

A new material capable of revolutionising energy storage systems is on the verge of being commercialised at the University of Newcastle.

A research team led by materials scientist Professor Erich Kisi has spent the past eight years developing and refining a method of blending metals such as zinc and non-metals such as carbon into a modular form capable of storing energy when heated.

The world-first technology will help accelerate the shift to renewable energy by providing clean, economic, and scalable storage of energy.

In its most basic form the final product resembles a brick, however, this can be scaled and adapted to different applications including being used as an alternative heat source for coal-fired power stations. 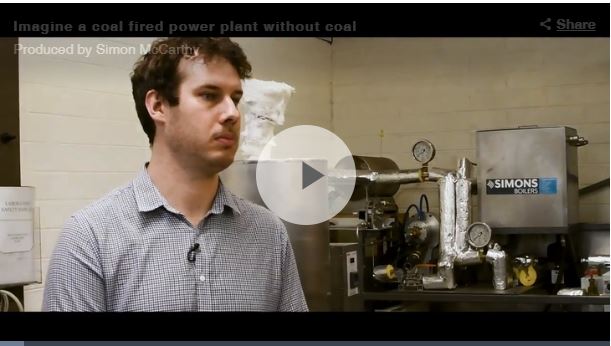 Testing has proven that the miscibility gap alloys (MGA) technology is also capable being used for heating in electric vehicles, providing power to remote communities and supplying heat to industry.

"This is a problem that everyone is trying to solve. We are the only ones who are doing it with a brand new material that no one has seen before," MAG Thermal chief innovation officer Alex Post said.

"As fossil fuels are replaced by renewables, we need a huge amount of energy storage to meet demand when there's no sun or wind. This might mean running an entire coal-fired power plant off our storage after being charged by solar and wind energy rather than coal."

"For home heating you charge up your heater with your excess energy from your roorf-top solar panels and discharge it at night. You can unplug it from the wall and all of that stored heat goes out into your house."

Powering up: Modular blocks of MGA can be stacked and scaled into thermal energy storage systems ranging from 100 kilowatt hours up to multi-hundred megawatt hours.

The project's origins go back to an earlier research project that aimed to convert extremes of temperature, such as those generated by concentrate sunlight, directly into electricity.

"We got a certain distance along that path and then we made the realisation that creating a new form of energy converter is not what's needed. What was needed was energy storage because even if we were to get that device working at high efficiency we still needed to store the energy," Professor Kisi Erich, who has more than 30 years of experience in materials science and crystallography, said.

From there the research path focused on creating a solid material that could be used to store heat.

As fossil fuels are replaced by renewables, we need a huge amount of energy storage to meet demand when there's no sun or wind. This might mean running an entire coal-fired power plant off our storage after being charged by solar and wind energy rather than coal."

"The best way in a macroscopically solid material is to have melting particles within it. So we invented a method of making that stable," he said.

"Initially we made tiny little samples in the laboratory as a proof of concept and then we have been exploring different combinations that we can deliver heat at different temperatures for different purposes. Room heating might be 200 degrees whereas in a power station you might want something that is 600 degrees."

Unlike batteries, which can explode and combust, MGA Thermal technology stores energy in the form of a non-toxic brick.

Another advantage is cost. The team created the technology from common materials and manufacturing processes.

As a result, MGA bricks can be made for about 10 per cent of the cost of lithium batteries yet produce the same amount of energy.

It can also be retro-fitted to applications such as power stations.

"Our storage materials can be shaped so that the infrastructure required to make the steam is built into it so it acts like a boiler. The thing which powers a coal fired station is a furnace to burn coal and a boiler to make steam," Professor Kisi said.

"The storage is heated by surplus renewable energy and then makes the steam internally so it is both the storage and the boiler and then it dispatches that steam to the turbine to make electricity."

The university spin-out company MGA Thermal was created to assist in the development of the patented technology.

The project was recently chosen to participate in the CSIRO ON Accelerate program which is dedicated to unearthing research in science and technology, and steering it towards commercialisation.

This year's cohort, which included MGA Thermal, was made up of nine teams across agriculture technology, medical technology and robotics.

"Researchers are provided with frameworks and coaching from mentors and facilitators to develop and test the most suitable commercial model to achieve impact," a CSIRO spokeswoman said.

The program allowed the research team to test their technology using the CSIRO's energy centre solar field at Mayfield.

"CSIRO contributed some of their big solar dishes to help us test and demonstrate that we could charge it up using direct focused sunlight," Dr Post said.

"We are now moving to a stage where we are proving it on a large scale. Hopefully that will happen in the next two years," Dr Post said.

Like the MGA Thermal team, CSIRO team has been searching for ways to overcome the challenges of intermittency, storage and dispatch of electricity generated from solar and wind energy.

A key reseach focus has been designing energy networks for the future that can operate effectively on renewable energy sources, like wind and solar, while supporting the grid.